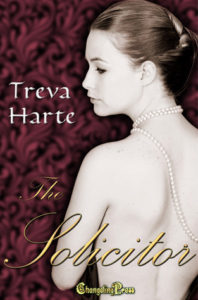 Lady Northenly is barely out of mourning for her late and not overly lamented husband when Will offers a proposal of marriage. Mr. Burke’s offer is startling, to say the least. Society would frown on a lady accepting such a proposal from a commoner, even if he is an accomplished solicitor.

The gentry would be even more aghast if they had any idea the things dear Will can do with his hands. And he’s a really good man to have around when the latest Northenly heir turns up murdered in the sitting room. But even though Will’s both useful and very inventive in bed, Sarah’s not sure she’s ready to give up a widow’s independence. What’s a lady to do?

“I don’t believe you will allow anyone the comfort of a soothing lie. Was that always how you’ve been or did your profession train you to be that way?” she asked.

“I fear both. Does that mean you intend to be around me more, uncomfortable though you may find it?” He was relentless, too, once he had his mind set on something.

“I am still considering the matter,” Sarah said.

“I may have some better qualities once you get to know me longer.” He turned her hand over and pressed his thumb gently against her palm. It wasn’t a kiss, or quite a caress, but it felt as if it was.

She imagined he could feel her hand tremble, just a little. It would be hard to miss, and William didn’t seem to miss a thing. “I can be most considerate when I care for someone,” he said.

She took a short, deep breath. It had been almost ten years since she had begun this deliberation flirtation dance. Did she still know the steps? She knew she wanted different things from a man than she once had, if she began again. “Thorough, too. You strike me as a thorough man,” she said. “William.”

A little flame seemed to dance in his eyes. He knew.

“Most maddeningly thorough, Sarah,” he agreed and slid his thumb up her arm to rest on the pulse that beat in the crook of her elbow. “Sometimes I take so long to reach a conclusion that people scream before I am done.”