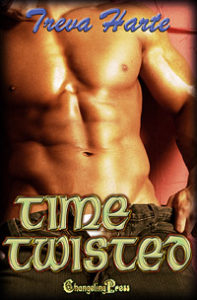 Marisha loses her job, then it looks like she’s about to lose her life to a couple of street thugs. The last thing she expects is to be rescued by a lusty medieval Lord — and an equally lusty — Dragon? And what’s her old buddy Tim doing in her bed? Eventually she’ll have to choose — one man, one universe, one time — but for now it makes for an interesting foursome.

Over two centuries separate Mercy Ward from the man who haunts her dreams. When this century’s grief becomes more than she can bear, she slowly begins to remember… another time… another life… another love…

Samantha wishes she could lead a life like her good buddy Moira’s — a life filled with temptations, and no reason to refuse them. Moira wishes she was in Samantha’s shoes — or, better yet, out of Sam’s shoes and in bed with Samantha’s husband Phil. One wish can change a lifetime…

“In every relationship, the partners have to grow and change. We just take the concept to extremes.” When Lucy tells C.J., a world famous athlete, he’s her mate and he’s one of those urban legend mutants who transform… well, she’s sexy and he’s interested, but he’s not that interested. Is he?

This collection contains the previously released novellas Out of Time, His Mistress, Intimate Choices, and Turns.

Praise for Out of Time“Treva Harte’s Out of Time is a steamy, time-bending romp through the corners of Marisha’s mind, exploring her most secret fantasies and desires. Lush and lusty imagery blend with hot sensuality to create a story that will have you flipping the fan on high to cool off. This piece displays some pretty spicy scenes, including some bondage and domination. Out of Time is just right for a short and sexy read!”

“I enjoyed how the author tied everything together at the end making this a story about love realized. The love scenes between Tim and Marisha, as well as, Lord Stephen and Marisha are well done and steamy.”

— Marina, Cupid’s Library Reviews
Praise for His Mistress
“You will be intrigued with this romantic love story of a love lost, then found. Emotions will take on a roller coaster ride with touching sex scenes in between.”
— Suz, Coffee Time Romance

“A wonderful short story about the wishes of our hearts and the realities that can come to us when we open ourselves to love. Treva Harte does such an amazing job blending the love of the past into the love of the present…”

“Whether it’s in spicing up Sam’s love life with Phil or falling in love all over again, this story has something for everyone. Ms. Harte delivers a story full of love and laughter that is not to be missed. Intimate Choices is a must have for any romance lover.”

“Treva Harte tells an incredibly steamy tale with best friends wishing for the other’s life in her short story. Each woman experiences the life of the other and learns some valuable lessons. Intimate Choices will curl your toes as it is a very good read!”

“Treva Harte writes a stimulating read with her futuristic story, Turns. You never know how things are going to turn out.”

She stood on tiptoe, reaching for what she craved. Damn, he was hard as steel and she didn’t mean his armor. But he was too tall. His cock was jutting forward but hit her too high to let her rub against him where she wanted to. Oh, she wanted to desperately.

She dug her fingers into his shoulders this time and began to inch up his legs, like someone might try to climb up a pole. She heard him grunt, once, and then his hand reached under her rear and pushed her up further. Her legs encircled his waist at last, his strong hands steadying her exactly where she wanted.

Who said they were from the Dark Ages? This guy was bright. Bright enough to figure out exactly what she wanted and take care of things. She was feeling something really hard. Marisha slid her hungry clitoris against a thickening shaft. Thank God he wasn’t wearing mail. Yeah. Oh, yeah. That was just hard man. A great deal of man.

Marisha pushed her hands into the tight auburn curls on his head. She loved the way his hair felt, crisp and tickling the palms of her hands. She loved the prickly rasp of his not-quite-shaved face. She bit the strong chin and then went back into an open-mouthed, slow kiss. His kiss had started all this. She wanted more. The man was quite a kisser.

He grunted and then, with a quick twist of his hands, he pulled her dress up above her waist. Marisha waited, half-eager, half-nervous. Nothing more happened at first.

He didn’t touch, he just looked. When was he going to do something?

Realization hit. He was doing something. An exciting something — exciting for them both. His breath rasped as he stared. As she stared back, Marisha squirmed. Her nipples were tight and eager. She was already wet, but his gaze was getting her wetter.

He must know how aroused she was. What was he planning to do next? When had she ever waited for a man to do anything? “Take my dress off.” She tugged at it.

“All off?” He sounded startled.

Didn’t he ever have sex naked? She’d never read any history about what happened when medieval knights had sex. Maybe that was too kinky for them. Well, he could learn something new because they were getting naked. From what she could tell so far, she definitely wanted to see this guy in the raw.

Marisha ran her hands over his shoulders then let them drift down to his ass. Mmmm. Nice ass. Tight, muscular and tailor-made for her hands. She was hallucinating beautifully.

His cock dug into her. This hallucination was getting even better. “Yes. All off. Then start on your own clothing.”