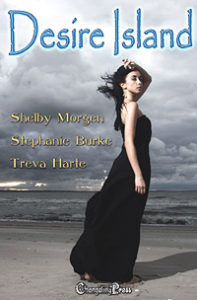 Desire Island
A gateway to the heart’s deepest desire,
To passion’s heat, to love.
The wind-tossed sign at the front gate always reads “Vacancy.”

Stephanie Burke: Take Me With You
Lost in a futuristic desert, Gray finds himself surrounded by his worst nightmares and falling for an exotic creature who stirs up memories of his dark past. Gray will stop at nothing to ignite a passion that will unite their souls as one.

Treva Harte: Reflections
The perfect trophy wife. Mason’s given Lilli everything she’s asked for. And she’s given him — everything. Now her mirror shows her a truth she’d rather not see. And is the hunk who beckons to her from another life in her past, or is he her future?

Shelby Morgen: The Summoning
A spell so powerful — and dangerous — its use is forbidden. Marylin accidentally steps into a future that’s not her own. Roanen appears to be the fulfillment of Marylin’s every sexual fantasy, but are the visions that haunt her memories of past lives and past loves…or mistakes she’s doomed to repeat?

Buy in Print
Buy in Ebook

4.5 Stars! “This book follows the lives of people who came to Desire Island to escape from a life filled with disappointment and pain. Marylin and Lilli bloom in their new environment. Gray comes face-to-face with memories of the past. When he comes to terms with his past, he is ready to begin a new life with the woman he loves. The reader will enjoy this trio of stories.”

“Good evening.” The trim blonde woman’s voice held all the warmth of a bottle of Chablis on ice. She nodded her head once in greeting as she passed through the inn’s front parlor, both acknowledging and dismissing them…

And leaving them alone.

Marylin turned away from the window to study the figure on the old settee just as thunder cracked loudly in the background. Gray wouldn’t want her to remember how much thunderstorms always frightened him. But he went rigid for the moment it took for the lightning to follow the thunder.

He didn’t say anything. Just sat there stoically, his hands wrapped around his tumbler, a tall, lean man, slightly shadowed in the light from the fireplace. She didn’t need to see his face to read him. She knew him too well. Dear Gray. Always trying to be a hero for her… she could have loved him for that alone.

Damn. She had such lousy taste in men.

No, that wasn’t fair. At least not to Gray. Gray was a fine man. Tall and graceful and handsome and — gay. Well, bi maybe. He’d been married, once upon a time, at least for a while. Just not to her.

It wasn’t Gray’s fault she’d fallen in love with him all those years ago. He’d warned her not to. Told her often enough all they could be was friends. She hadn’t listened. Hadn’t understood. She was a rescuer, after all. She always fell for that wounded look. She’d been so in love with him once… or at least infatuated. Maybe that was why now he was the only one she felt would really understand.

She took her time crossing the room, reminding herself that he was a friend. Just a friend. That’s all he’d ever really been. All he could ever be. Sort of like a really great girlfriend. One who was actually taller than she was.

“I don’t know what went wrong or just exactly when, but one day it hit me. I could ignore the flirting with his students. I could ignore the not-so-subtle innuendoes from other professors. I couldn’t ignore my own feelings. People don’t change. We are who we are. I wanted Don to be someone he’ll never be. I wanted him to care about me. To need me. The real me, the one inside he never got to know. Twenty years, and we were still strangers. Don had some image of who I should be, the perfect wife, and it was soooo not me! I just don’t care enough to live with the lies anymore. Maybe I never did. Sometimes I think I married Don because I just gave up. I quit looking for that one perfect man I was meant to be with. My soul mate.”

Because I thought my soul mate was you, and I’d already lost. I settled. For too little. Yeah. I settled for way too little. Marylin swallowed two fingers of Amaretto, ignoring the burn. She’d never been much for subtlety. There was a time for sipping, and a time for getting drunk. This night was definitely the latter. “Do you still believe in soul mates, Gray?”

Gray raised his glass to his lips and drank deeply of his favorite poison, aged Canadian whisky. Marylin cringed. “I used to. I wish…”

His deep, deep voice seemed to purr as he turned to lift his gaze toward her. Light filtered over his face. The color struck her once again, odd and fascinating and vaguely wrong for this world. How many people had violet eyes? Gray was the only one she’d ever met. His eyes were true violet, not some deep shade of blue that seemed to take on a purple cast — a deep, rich, violet framed by eyelashes the color of midnight.

“What?” Marylin took another long swallow of Amaretto. “Sometimes you have the oddest way of not saying things.”

“Nothing.” He smiled that deep, sad smile that always got to her. “I was just — never mind. It was a long time ago. I’m sorry, Baby-Girl. I hoped things would work out better for you. I thought things were going swimmingly between you and what’s-his-name.”

“Swimmingly?” Marylin threw her head back and roared with laughter as she sprawled on the couch next to him, her long legs bent double under her. “Swimmingly! I like that…”

No, nothing subtle — or fake — about Mary. Gray tossed back the last of his whisky, praying it would give him the courage and the power to forget. He pointed to her bottle of Amaretto. Maybe it was time for a change.

“I’ve missed you too. No one else understands my sense of humor anyway. I love your smile. And I love the fact that I don’t get a cramp in my neck trying to give you a hug. And for the record, you’ve always had my friendship. No matter what, that will never go away.”

He lifted the glass to his lips and took a quick gulp. Then he winked at her before his face twisted into a visage of disgust. How could she drink this crap? But when the warmth hit his stomach, he remembered. Amaretto had always had that effect on him.

“You didn’t bring Carlos. I thought you might…” Marylin tried to maintain her smile for his benefit, but he knew what she was really asking.

“Carlos… Carlos is gone. For good. It’s just you and me this weekend, Baby.” He stared down into his glass before a wry smile twisted his full lips. When did the forgetting start? Maybe he needed a bit more. He took another drink.

“Damn, I’m sorry, Gray. That was one beautiful man. Just the way we both like ’em. Tall, dark, and handsome. It’s not just a cliché!”

Did she sound a little relieved?

Not anymore. He wouldn’t let it matter. “Tall, dark, handsome, jealous, and colder than a witch’s tit in January. I always seem to fall for the betraying type, and most of that breed seems to be tall, dark, and handsome.” Gray pulled her over against his side with a gentle tug on her wrist, jumping slightly as another crack of thunder split the night.

The lightning followed closer this time, lighting up the beach and the tossing waves beyond with a pale wash of fire. She snuggled against him, maybe for warmth, but he suspected it was as much for his benefit as hers. She knew how much he hated thunderstorms.

“What do you think’s wrong with us, Gray? We have such lousy taste in lovers…”

Gray laughed at that, his mood lightening. Man, did his Mary-Baby have a gift for understatement. The logs settled in the fireplace, sending out a wave of small, bright orange sparks. “We’re too good for this world, Baby. We would have to go to an alternate universe, back in time, another planet or something, to find people who are good enough for us. We’re a special breed, Baby-Girl. The last of the heart-hungry people. We want… we need more than a quick roll and a few fake words of love. We want it all.”

Leave us a reply Cancel Reply